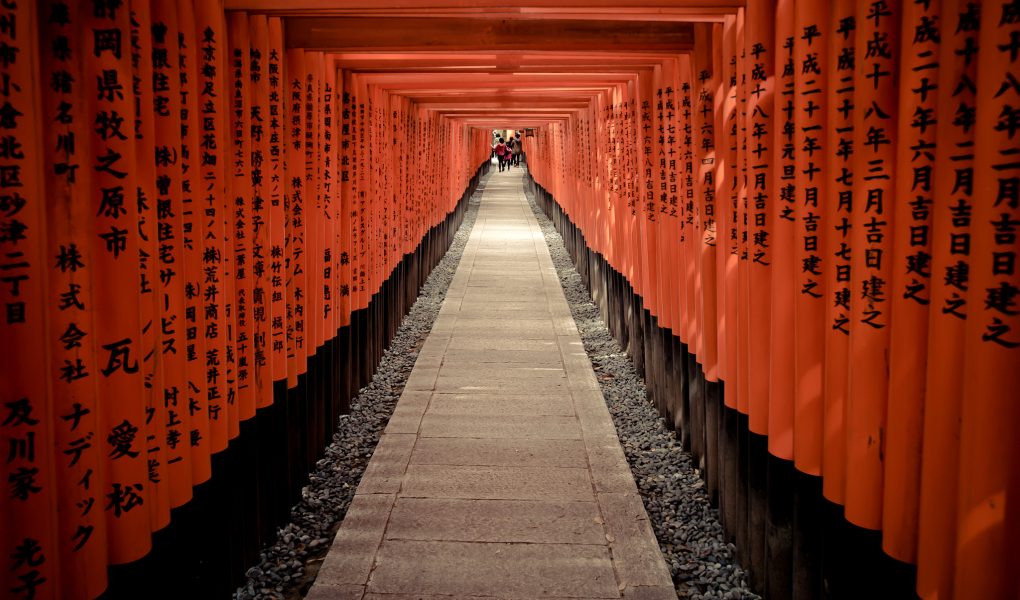 Fushimi Inari Taisha is the main shrine for Inari, one of the most prominent gods (kami) of the Japanse Shinto religion. The shrine is especially known for it’s thousands of red/orange torii gates lining the paths up the mountain behind the shrine.

On the edge of Kyoto, with its back against mount Inari is Fushimi Inari shrine. The shrine is dedicated to Inari, the god of rice primarily, but also of tea, sake, fertility, industry and more. The shrine consists of a large main gate (Romon Gate), behind it the worship hall and behind that again, the main shrine (Honden).

On the shrines grounds are a large number of statues and symbols of foxes (they may look like dogs). The fox is said to be a messenger of Inari, and therefore has an important place at all shrines where Inari is worshiped. The foxes are often depicted with a key in their mouth – this is the key to the grainery.

On the right side, between the main building and the shrine office, a set of stairs take you to the starting point of a hiking path which goes up mount Inari. The path is unique in that it is covered by thousands of torii gates. The gates, which are donated by companies and individuals, are so many that they effectively create a covered walking path.

After passing through the first section of gates, the path splits into two. Visitors can freely choose which one to take. Both paths end in the same place, in a small square with a shrine and a shop. From here, the ascend continues along the torii covered path on the left side of the square. This section of the path ends at Yotsu-tusji intersection – a view point with great views of Kyoto city. The hike up to this point is about 30-60 minutes depending on your pace. There are many small shrines along the way, often covered with miniature torii gates, which have been donated by visitors.

While most visitors turn around at Yotsu-tusji one can actually continue the hike along a circular trail which goes around the mountain top. The circular path has a few interesting things to see, despite the density of the torii gates being lower. 10 minutes after Yotsu-tusji intersection, just behind Tanaka-sha shrine is Kojin-mine, a small peak with an even greater view of Kyoto. Continue another 40 minutes to make it to the “first summit” which is the highest point of the mountian. Here is a shrine, Omikuji, where visitors can draw a fortune paper. The fortunes here are known to be some of the most accurate. Along the path further interesting shrines and sights wait for the dedicated hiker. The loop is doable in about 2 hours.

According to Yamashirokoku Fudoki, an old description of provincial culture and oral tradition, the god Inari took residence at mount Inari after a miraculous event. Irogu no Hatanokimi had shot an arrow at a rice cake. The cake transformed to a white bird, which flew up the mountain and landed. Where the bird had landed, rice started growing. Taking this as a sign, Hatanokimi built a shrine on the same site. The name “Inari” is said to come from this rice miracle – “ine” means rice, and “nari” means growing.

The worship of Inari at mount Inari dates back to 711 or earlier, when the first structures were built on the mountain. In 816 the shrine was moved, but it wasn’t until 1499 that the current main building was constructed following a devastating fire in 1468. Over a hundred years later, in 1589,
Toyotomi Hideyoshi donated the large main gate. It wasn’t until the Edo period (1603-1868) that people started donating Torii gates to the shrine, when a wish came true or they were hoping for one to come true. This tradition became hugely popular and continues today.

By train: from Kyoto Station, take the JR Nara Line 8 minutes (2 stops) to Inari Station. From there, walk 2 minutes to Fushimi Inari Taisha. The train is covered by the Japan Rail Pass. 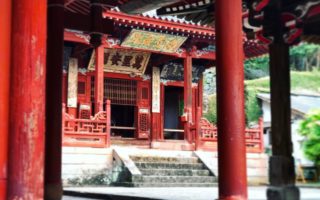