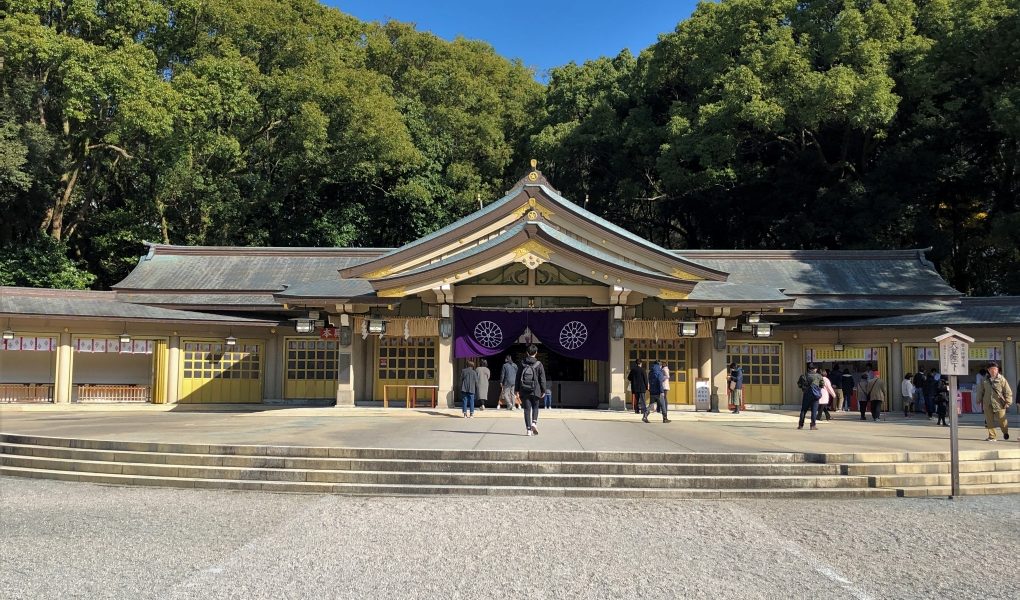 Gokoku Shrine in Fukuoka is a modern shrine, dedicated to the Japanese people who died in the wars, beginning from the start of the Meiji era (1868) and forward. The shrine is also a place to pray for family and safety. Apart from the unique golden color of the shrine buildings, Gokoku is also known for it’s massive wooden torii gate.

The space around Gokoku Shrine is large and open. It is clearly different from your average Japanese shrine, and it is immediately clear that this is a construction of newer date, compared to other shrines in Fukuoka. The wide open space, and the golden facade and detailing of the main building draws you into the shrines embracing wing shape. Backed by a tall, green forest, the city seems to disappear completely when you enter the shrine grounds. The occasional airplane thundering across the sky on departure from Fukuoka Airport reminds you that you are in the middle of the city, but apart from that it’s hard to tell.

If you enter the shrine from Ohori Park, then you will be led through the massive 13m wooden torii gate which acts as the main entrance to the area. The gate is made of raw, unpainted and untrimmed wood – the two pillars are massive tree logs. The gate is said to be the largest torii gate of raw wood in Japan. While it does sound like an extremely narrow and specific category to be the biggest in, the gate at Fukuoka’s Gokoku Shrine is indeed very impressive.

The name Gokoku ( 護国) is not unique to Fukuoka’s Gokoku Shrine. The name easily reveals the shrines purpose to those who understand Japanese. Gokoku literally means “the defense of ones country“, a suitable title for a shrine which is dedicated to the people who died in war for their country. Across Japan many Gokoku shrines exist – most of them appeared shortly after the Meiji restoration in 1868. Common for all of them is that they honor those who died for their country.

The name “Gokoku” came around in 1939 when the government interfered and divided these shrines into two groups, basically selecting specific ones to be designated shrines (one per prefecture at the most). When Japan was defeated in the second world war, the occupying forces kept the “Gokoku shrines” under strict observation due to their patriotic nature. For that reason many shrines changed their names, but today many have been changed back to their original names.

Every year in August, Gokoku Shrine in Fukuoka hosts the Obon Mitama Matsuri. Obon Matsuri is a Japanese custom, where once a year you honor your ancestors spirits. During the festival the spirits of the dead are said to visit the home altars of their relatives. Naturally, this festival has huge significance for Gokoku Shrine. During the festival 6000 lanterns are lit, representing the lost souls to which the shrine is dedicated.

By foot: you can easily visit Gokoku Shrine after seeing Ohori Park and Fukuoka Castle Ruins. Follow the large road which separates the park and the castle ruins. Head south on the road and you will arrive very near the shrine’s entrance.

By bus: many busses stop near Gokoku Shrine, Ohori Park and the Ohori Park Japanese Garden. From the Hakata Station area you can catch bus 9, 11, 15, 16, 17 and 214 among others, and get off at Ropponmatsu and walk 5 minutes. From Tenjin, bus 13 and 140 are convenient. Get off at Fukuoka Castle Ruins and NHK Broadcasting Center and walk a few minutes. Find more connections on the Nishitetsu website linked below.