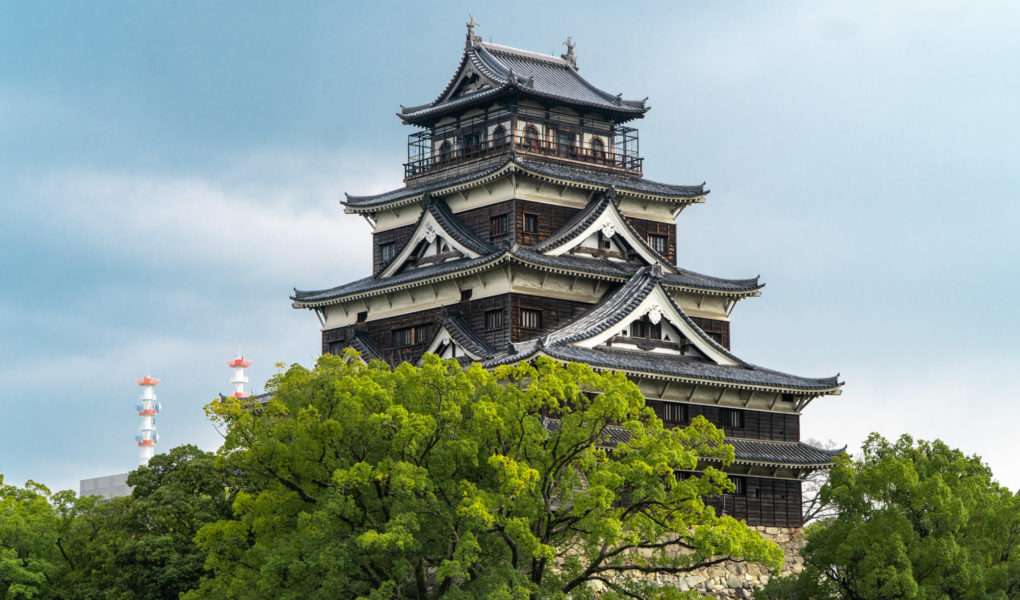 Hiroshima Castle (広島城), cutely nicknamed the “Carp Castle“, is located in the center of Hiroshima city. It is a castle with history dating back to the 1590’s. While completely destroyed by the Atomic Bomb in 1945, it has been reconstructed in it’s original appearance, and today hosts a museum documenting the history of Hiroshima prior to the second world war. There is a nice view over the city from the top of the castle.

A lot of museums and memorials in Hiroshima are dedicated to the tragic nuclear bombing in 1945. Hiroshima Castle is an exception. While the castle was destroyed in the bombing, the museum which is found inside the reconstructed castle introduces visitors to the interesting history of Hiroshima before the second world war. It is a great place to learn how 5 tiny villages and a castle evolved into the bustling, modern city that is Hiroshima.

Other interesting things to see on the castle grounds are the Hiroshima Gokoku Shrine and three trees, A Willow, Eucalyptus and Holly, which astonishingly survived the atomic bomb.

Hiroshima Castle was constructed some time in the 1590’s by Mōri Motonari, a prominent feudal lord. The castle was originally surrounded by no less than 3 moats, and also protected by the nearby river. It was a great example of a flatland castle – a castle located in a flat area rather than in a naturally protected location like a hill or mountain top.

There was no city in the area when Hiroshima Castle was first constructed. The area was defined by the river delta and it’s islands. On those islands were five small settlements which led to the area being named “Gokamura“, meaning “five villages”. There are a few theories as to why the castle was named Hiroshima. Firstly, “five villages” is an unimpressive name for a fortification, so the name Hiroshima was chosen. One story goes that the name is a combination of “hiro” taken from the the name Hiromoto, an ancestor of Mōri Motonari and “Shima” was taken from the name “Fukushima Motonaga” who helped chose the location of the castle. Another story explains the name more literally; 広島 (Hiro Shima) translates directly to “Wide island” and is supposedly a reference to the numerous large, flat islands which were in the river delta back in the days.

In 1600 the Battle of Sekigahara took place, effectively leading to the establishment of the Tokugawa shogunate in 1619. Mōri Motonari was forced to leave Hiroshima Castle, which was then given to Fukushima Masanori. Fukushima ruled the domain from Hiroshima Castle until 1619 when he was sent away because he repaired the castle without permission from the central rule in Edo (Tokyo). The Asano family was then given rule of the castle and domain, and managed to keep that status in the family throughout the peaceful Edo period, until the Meiji Restoration in 1868.

After the Meiji Restoration

Following the Meiji restoration, Hiroshima Castle was converted into a military facility, sparing it of destruction. The castle grounds became home to the Imperial General Headquarters. Remains from the headquarters can still be seen near the main keep today.

During the second world war the castle area was used for military purposes, despite Hiroshima Castle being designated a national treasure in 1931. The castle was completely destroyed by the atomic bomb dropped on Hiroshima in 1945. A reconstruction of the main keep was completed in 1958, but is made of reinforced concrete rather than traditional materials and methods.

By tram: the nearest tram stops to Hiroshima Castle are Kamiya-cho east and west (route 1, 2, 6 and 9) and Jogakuin-mae (route 9). From both stations it is a flat 10-12 minute walk to the castle entrance.

By train: the Astram Line stops at Kencho-Mae Station which is the nearest station to Hiroshima Castle. 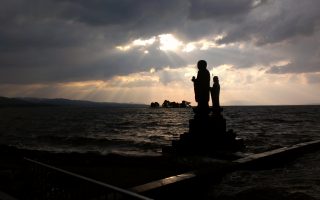 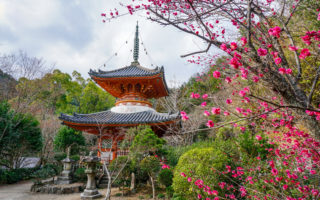