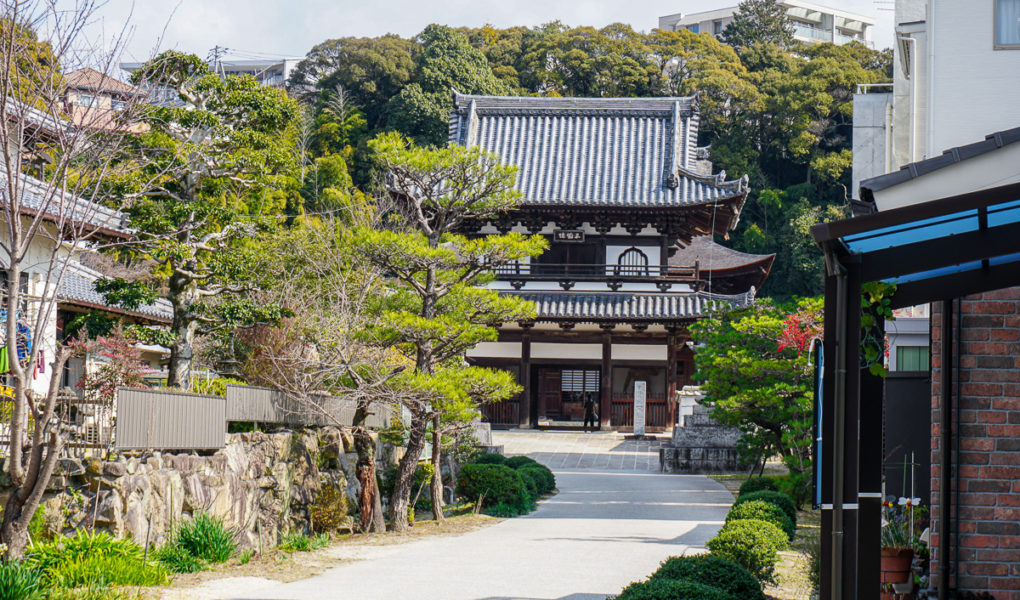 The Futabanosato trail is a historic 10km walking trail in Hiroshima.  Hiroshima is mostly associated with the atomic bombing which happened on August 6 1945. The history of the horrors which happened here rightfully occupies a lot of the city’s museums, parks and monuments. Today Hiroshima consists primarily of modern buildings as very few buildings survived the bomb. However, prior to the atomic bomb Hiroshima was a lively castle town like many others in Japan, filled with history, culture and tradition.

Futabanosato Walking Trail takes the hiker past 16 historic locations around the base of mount Futabayama. Apart from one museum, all of the stops along the trail are temples and shrines – some of them partially survived the atomic bomb, and provide a rare look into the Hiroshima which existed prior to the bombing.

The 16 stops of Futabanosato Historic Trail

Fudo-in temple has a long history, and largely survived the atomic bomb. The damage to the roof was repaired, and the temple stands nearly as it did before the war. It is the only building in all of Hiroshima City to be designated a national treasure. Read more

This temple was first constructed in 1695 by Maeda Manhime, the wife of Asano Mitsuakira, the second head of the Asano clan which ruled Hiroshima from Hiroshima Castle. Manhime was from the powerful Maeda clan. The ties between the two clans made by this marriage can be seen by the presence of the Maeda clans Plum Blossom crest on the temples washbasin. The temple has been modernized and is a concrete building today.

The waterworks museum tells an important story of how Hiroshima’s water supply was kept up during the crisis and devastation that followed the atomic bombing. While the building was destroyed and main pumps stopped working, an loyal worker at the plant quickly started an emergency pump and began repairing the pumps despite burns on his body.

Photo by Taisyo of wikimedia. CC BY 3.0.

Ikari, meaning “anchor” is a hint at this shrines dedication. It is a seafarers shrine dedicated to the sea gods. There has supposedly been a shrine at this location since before Hiroshima castle was constructed in 1589.

This is a small roadside shrine with an interesting story. It is said that near this spot, the feudal lord Masanori Fukushima buried 8 swords as a sacrifize to the water gods when flooding was threatening the city. The swords replaced human sacrifice which wasn’t unheard of at the time. This shrine from 1617 is the only historic remainder of Fukushima’s period of reign.

A buddhist temple which started as a Jodo-shin sect temple and later converted to Tendai. Originally constructed in 1533, but rebuilt in 1788 following a fire. As a result of the atomic bomb blast, the main hall leans slightly. A large, 350 year old ginkgo tree survived the blast and can still be seen by the temple gate.

This fairly young shrine was first erected in 1835 by Naritaka of the Asano clan that ruled Hiroshima from Hiroshima Castle. Nigitsu shrine enshrines Nagamasa, the clans founder. It was completely destroyed by the atomic bomb, but was reconstructed in 1984. It is an interesting link to the early history of Hiroshima and the Asano clan.

Myojo-in has been around for a long time and it has been used by the rulers of Hiroshima through many decades. The complex was completely destroyed by the atomic bomb, but was reconstructed. A large ginkgo tree and a wooden figure of Ako Nishi were among a few items which survived. The figure is stored in the main hall. Today this temple complex might be one of the best kept in the area. Try to find the circular zodiac statue which is a unique sculpture.

This was originally a Hachimangu shrine, and is thought to date all the way back to the 1200’s. In 1872 the name of the shrine was changed to Tsuruhane. The name, which is made up of the words “crane”, “wing” and “feather” is a reference to the location of the shrine. The mountains in the background are said to look like a crane with it’s wings spread, when viewed from here. The shrine was completely destroyed by the atomic bomb, but has later been reconstructed.

The Hiroshima Toshogu Shrine is a shinto shrine dedicated to the former edo-period shogun Ieyasu Tokugawa, the founder of the Tokugawa shogunate (1603-1868). The shrine is beautifully located at the foot of mount Futabayama. Read more

On the mountain side behind the Toshogu Shrine, a path leads up through 120 vermilion colored torii gates. Here lies the small Kinko Inari Shrine, with it’s fantastic view and quiet atmosphere. The shrine has been in use for around 250 years.

Hiroshima is quite a flat city, yet there is one spot in the central city where it is possible to get a panoramic view over Hiroshima; from the Peace Pagoda located at the top of mount Futabayama. The Pagoda was errected in 1966, so it is not as old as many of the other stops along the trail. However, the view over the city is unique and worth the trip up the mountain. Read more

This shrine is dedicated to a 9th century poet, scholar and politician, Michizane Sugawara. In the shinto religion he is considered a god of learning. in 901 he was sent to Dazaifu in Kyushu, and is said to have made a stop on this small mountain on the way.

Kokuzen-ji was constructed to be the official temple of the Asano Clan who ruled Hiroshima from 1619 and up to the Meiji restoration in 1868. The temple was supposedly first constructed in 1671.

Photo by Photo by Taisyo of Wikimedia. CC BY 3.0.

Shoko-ji temple is one of the oldest buddhist temples in Hiroshima. It dates back to before the establishment of Hiroshima Castle. Terumoto Mori who built the castle is said to have stayed at this temple when he was planning the construction of the castle.

This is a popular temple for students to pray for successful exams. Often miso paste is offered as part of the prayer. The temple is dedicated to Saizo Kani, a vassal of Masanori Fukushima who was one of the early rulers of the Hiroshima Domain. 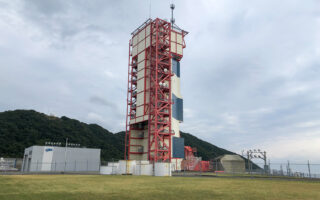 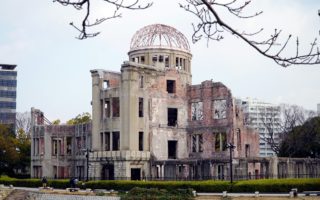