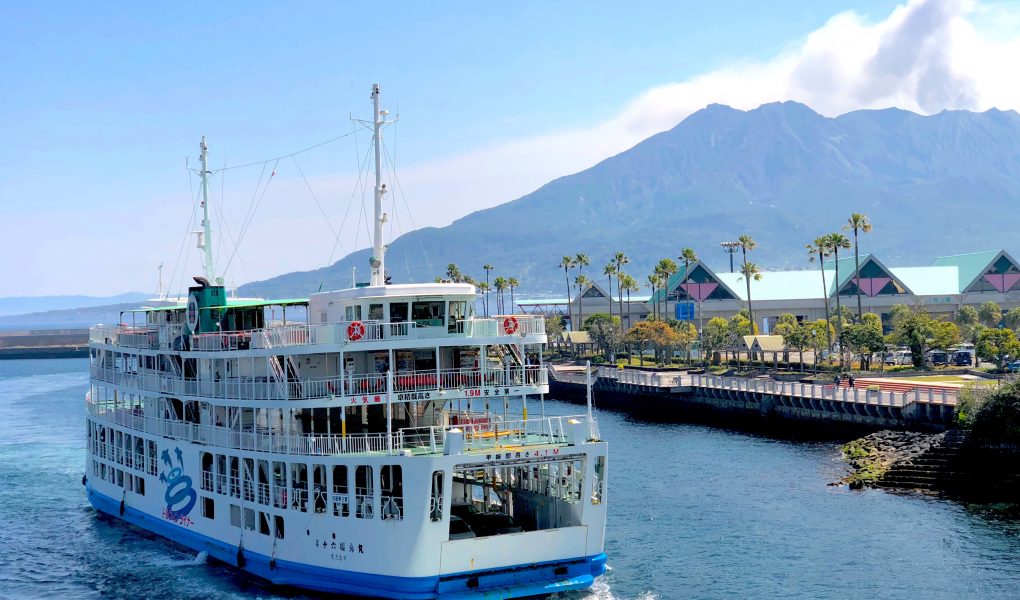 In this post I explain in detail how to get to the volcanic island of Sakurajima in Kyushu. If you want to read more about Sakurajima then head over to my detailed Sakurajima post. In this post I will only cover the transport.

Sakurajima island is a peninsula despite it’s name. The peninsula can be accessed in two ways – by ferry or by car. Therefore this post is separated in two main sections covering each method of transport.

Sakurajima is located only 8km (5mi) from Kagoshima, a city of 600,000. Being such a large city Kagoshima has very good train and bus connections, making it easy to get to and from. Naturally this has made Kagoshima the hub for getting to Sakurajima.

The first step on your journey is to get to Kagoshima, if you aren’t there already. The Shinkansen bullet train stops in Kagoshima, which actually makes it possible to take the train all the way from Tokyo without a change.

A word on Train Stations in Kagoshima

From Fukuoka or Kumamoto -> Kagoshima Chuo

From Hakata Station (Fukuoka), take one of the following Shinkansen lines in direction of Kagoshima.

Tsubname and Sakura are covered by the Japan Rail Pass, making the round trip free if you have one. The cheapest JR Pass costs around $270 in 2018, so if you plan more train rides than this one to Kagoshima, the the pass will most likely save you some money. I recommend that you read my post on JR Pass to see if it’s worth it for you.

This plan also works from Kumamoto, just the ticket cost will be somewhat lower.

Attention: Mizuho is a limited-stop commuter train and isn’t covered by the Japan Rail Pass.

From Nagasaki the trip to Kagoshima isn’t exactly straight forward, despite being physically closer to Kagoshima than Fukuoka. In some cases the fastest way between Nagasaki and Kagoshima is actually to take the train backwards to Hakata Station in Fukuoka and get on the Shinkansen train there. I recommend that you do some careful planning here, not to waste too much of your time on transport.

If you absolutely must go from Nagasaki to Kagoshima, then here are some options:
Take the Kamome line from Nagasaki Station to Hakata Station. The ride is just under 2h. From Hakata station, follow the instruction in the previous section (from Fukuoka -> Kagoshima Chuo). Alternatively get off the Kamome line at Shin-Tosu station and catch the Sakura Shinkansen there. These are sadly the fastest ways to get between Nagasaki and Kagoshima by train – it takes about 3h30min total.

Alternatively there is a highway bus going from Nagasaki to Kagoshima, but it is infrequent and takes around 5h30min. If you are interested in taking the bus then check out http://www.keneibus.jp.

If you have a Japan Rail Pass the entire trip is free. Otherwise it will cost you around ¥14,500 ($130) each way. That means if you take the trip back and forth the JR Pass will pretty much have paid itself.

Alternatively you can take tram No.2 from Kagoshima Chuo and get off at Suizokukanguchi. The ride is about 15 minutes. From the tram stop you are 7 minutes of walking from the ferry terminal.

The ferry runs between Kagoshima and Sakurajima with very high frequency. There’s supposed to be around 70 round trips per day, so no need to plan according to a specific departure. You can just show up. It even runs 24/7 so you don’t need to stress about making it home on time.

Boarding the ferry can be a little confusing. First of all, the signs there tell you that you have to pay your ticket when you get to Sakurajima. At first I wasn’t too sure about that myself, but it’s true. Just board the ferry and you will be charged when you land on the other side. Make sure to have cash, and preferably exact change. The ferry ticket is only ¥200 (US$ 2).  You can find current prices on Kagoshima City’s official website.

Having a car when on Sakurajima can be a huge advantage if you really want to explore the island. There are two ways to approach Sakurajima by car:

If you are already in or near Kagoshima, then the quickest way to Sakurajima might be to take your car on the ferry. The cost for bringing a car on the ferry depends on the length of the car. The prices of 2018 start at ¥880 each way for tiny cars under 3 meters (9.84 ft). A car between 4-5 meters will cost ¥1600 each way.

Drive around the bay

If you are not comfortable taking the ferry, or simply want to enjoy the scenery at your own pace, then driving around the bay is an option. It’s a 70km ride from Kagoshima and will take about 1h20min.

If you drive all the way from the north of Kysuhu, then driving around the bay is the natural choice. In such a case taking the ferry will only add stress and unnecessary driving in the city.

Are you looking into getting a Japan Rail Pass? Then check out my guide for the JR Pass. I also recommend that you check out my list of guide books for Japan as well as all my other posts about Kyushu. Are you planning to stay in Fukuoka? Then check out The Life Hostel. You might also be interested in my post about visiting Japan on a budget. 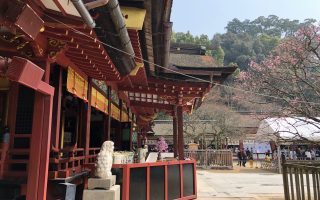 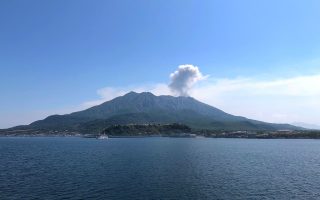 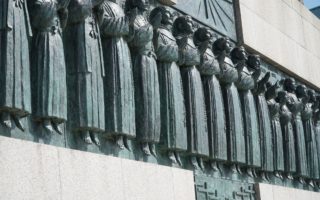