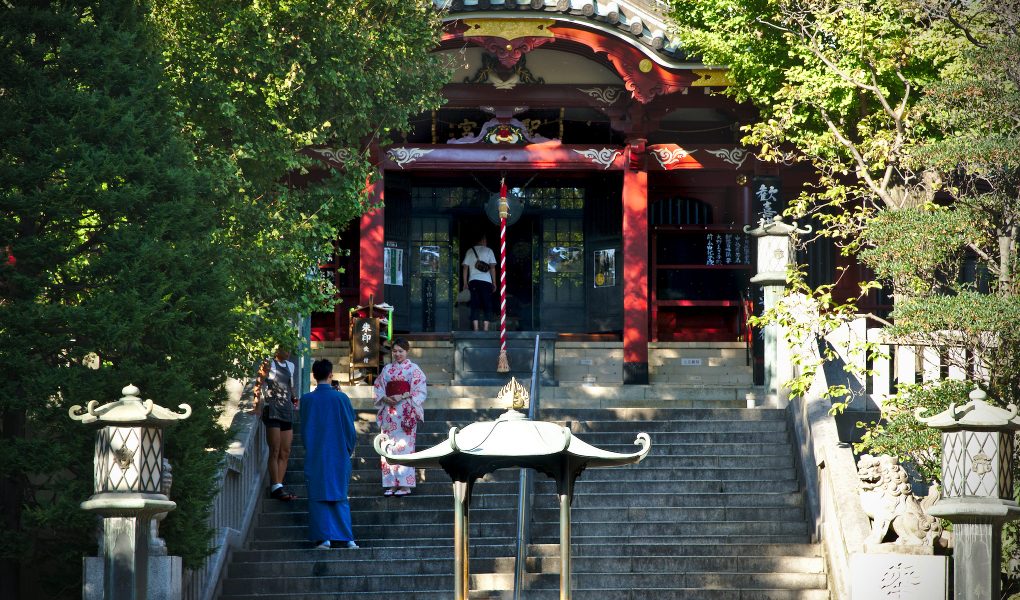 Matsuchiyama has been known for it’s beautiful location for centuries. The temple sits atop a small hill, right next to Sumida River. While the temple isn’t very visible from the growing city today, it used to overlook the small houses along the river. Surrounded by dense forrest, and with a (once) beautiful view of the river, the temple has mesmerized painters, poets and other artists up through the edo-period (1603-1868). Hence it can be seen depicted on many woodblock prints and paintings from the period.

A visit to Matsuchiyama Shoten can conveniently be combined with a walk through Sumida Park and a visit to Senso-ji temple.

The daikon (radish) and the pouch

Let’s start with the most obvious question here, before proceeding with all the interesting historic details of this place. Why are there Daikon (japanese radish) everywhere on, in and around this temple? The vegetable is seen depicted on the temples woodwork, lanterns, the rainchains and rain water collectors and you can even buy them on the temple grounds.

The answer is in the symbolism which lies in the Daikon radish. This simple vegetable symbolizes well being, good harmony in the family and between married couples as well as luck in matchmaking and fertility. This ssymbol aligns nicely with the temples legend and its dedication to Daisho-Kangi-Ten, as will be explained in the history section.

The pouch which is also depicted everywhere around the temple is a symbol of prosperity and good business. Hence Matsuchiyama Shoden is a great place to pray for some of the most common problems people encounter – family, marital and economic.

Matsuchiyama Shoden also hosts a (slightly mysterious) oil bathing ritual which dates back to at least 857, when the Tendai priest Ennin is said to have performed the ritual here for 21 consecutive days.

It is the most sacred ritual one can perform to honor the deity Daisho-Kangi-Ten, and it grants the performer immediate fulfillment of all wishes. The ritual is a week long and an application must be filled, and a sizeable fee paid ( ¥ 3500). If the ritual is performed for 7 days straight, the temple rewards you a special amulet. The essence seems to be washing away your troubles and bad desires, leaving them to Kangi-Ten and living your normal daily life trouble-free.

Matsuchiyama is the name of the mountain on which Matsuchiyama Shoten sits. The legend says, that the mountain suddenly rose out of nowhere sometime between the late 500’s and early 600’s (during the reign of Empress Suiko). Shortly after, a golden dragon came down from the heaven to protect the new mountain.

Six years after the dragon had descended on the mountain, the country experienced a serious drought and people were suffering. Kannon, in her eleven-faced incarnation, appeared in the form of Daisho-Kangi-Ten (also known just as Kangiten) to relief the people.

It is said that in 857 Jikaku-Daishi (Ennin), an important priest of the Tendai buddhist sect, stayed at this temple when passing through on travels. He is said to have carved the image of the eleven-faced Kannon.

While Matsuchiyama is technically a temple today, one can see a large plaque in front of the main hall that reads “Shoten-gu” signalling to the visitor that it is a shrine. This is a remainder from the time when the two belief systems, buddhism and shinto, were closely related. During the Meiji restoration (1868) the two were forced to separate. Today, there are plenty of places where the two belief systems overlap, hence many religious institutions embrace the common heritage and tradition.

By train: the nearest station is Asakusa Station. Lines that stop here are Asakusa Line, Ginza Line, Nikko-Kinugawa, Ryomo, Shimotsuke-Kirifuri and Tobu Skytree Line. From Asakusa Station it is a 850m (0.5mi) walk to Matsuchiyama Shoden.

By bus: bus #42 stops a few streets behind the temple at the stop “Asakusa 7” 浅草七丁目（バス）and “Sumida Park Bus Stop” 隅田公園（バス）. It is possible to take this bus to and from Asakusa Station. 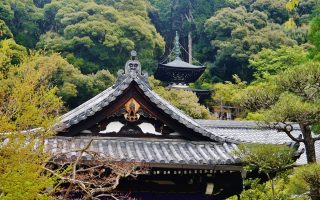