Nanzen-ji is one of the most important Zen temples in Japan. It is the head temple of the Nanzen-ji Rinzai sect and is known especially for it’s beautiful stone garden. The temple grounds host several other temples and a huge Meiji-era aqueduct. The area is accessible free of charge, but there are fees to enter specific buildings in the complex. The temple is located a short 10 minute walk from the southern end of the Philosophers Walk, making the two a good combination,

Visitors enter the temple grounds through the enormous 22 meters tall Sanmon main gate from 1628. The gate has a viewing platform about half way up, which can be accessed by stairs against a small charge. From the platform there is a magnificent view of the temple area and Kyoto. Nanzen-ji’s Sanmon gate carries a significant meaning in Rinzai zen buddhism

Immediately behind Sanmon gate is the Hodo hall (lecture hall). The building contains a number of Buddha and Bodhisattva statues, but is not open to the public. It is however possible to see part of the famous dragon ceiling painting from the outside.

Behind the Hodo Hall, and connected by a covered walk way, is the Hojo Hall (abbot’s living quarters) – a national treasure of Japan. This building, which was moved here from Kyoto Imperial Palace in 1611, is famous for the paintings which can be seen on the inside, and it’s excellent rock garden. Most famous are the two golden, sliding-door paintings of Chinese tigers.

The Hojo Garden was designed by the famous edo-period artist and garden designer Kobori Masakazu, who also designed the gardens of Kyoto Imperial Palace, Nijo Castle and Osaka Castle among others. The garden consist of a number of big stones, placed in a large area of raked gravel, arranged in natural patterns. The garden is also called “leaping tiger garden” due to the placement of the larger rocks, which are said to resemble a tiger carrying her cubs across a body of water. Seeing this resemblance might require a bit of imagination though.

The site of Nanzen-ji temple was originally where emperor
Kameyama (1249 – 1305) built his detached palace in 1264. When Kameyama later took up Zen studies, he dedicated the palace to zen Buddhism and converted it to a temple in 1291.

Like many other temples in Japan, Nanzen-ji has suffered under major fires and wars over the centuries. The last major fire was in 1597, after which it was rebuild on the initiative of newly appointed chief abbot, Ishin Sūden, an influential advisor to the Tokugawa clan.

The layout of the complex and building has changed with the years. Most structures present today date back to the 1600’s – like the Hojo which which was moved from the Imperial Palace to Nanzen-ji in 1611.

Nanzen-in is a subtemple of Nanzen-ji, located within the temple grounds. The temple is located in the area where Emperor Kameyama’s detached palace was originally located. There is a beautiful strolling garden centered around a pond which is said to be in the shape of a dragon. It’s also said that the garden was originally designed with elements from around Japan – cherry trees from Yoshino, reed plants from Nanba, maple trees from Tatsuta and live frogs which were brought from Ide.

Konchi-in is another subtemple of Nanzen-ji. The temple dates back to the 1400’s when it was constructed by shogun Ashikaga Yoshimochi. It wasn’t until 1605 though, that it was relocated to the Nanzen-ji complex. In the following years, between 1611 and 1632 the beautiful garden was built. It’s thought that the famous artist and garden designer Kobori Masakazu was involved in the design of this garden – just like the Nanzen-ji Hojo Garden.

Often overlooked is Tenjuan temple, another subtemple within the Nanzen-ji precincts. The temple is much less visited than Nanzen-ji, making it a great place to find some peace and tranquility. The two gardens – a pond garden and a stone garden – are truly drawing, and especially stunning during the fall season when the leaves change color.

Being the head temple of the Nanzen-ji Rinzai sect, Nanzen-ji temple has a number of temples under its supervision. Further more it is the superior temple to the “5 great zen temples of Kyoto”. It isn’t actually one of the 5 temples itself, but rather a level above, bearing the title of “first temple of the land”.

The large, European-style aqueduct which traverses the temple grounds is quite an unusual sight. The aqueduct, which goes by the name Suirokaku Water Bridge, is part of the Lake Biwa Canal. The Canal was built in the late 1800’s during the early part of the Meiji period. The purpose of the Lake Biwa Canal was to aid Kyotos development by moving water from the lake to the city. The waterway was used for drinking water, power generators and for transporting people. Today the water from the canal is used for general water supply and firefighting.

By subway: Keage Station is the nearest subway station to Nanzen-ji. The Tozai Line services this station. From the station it’s a 10 minute walk to Nanzen-ji temple.

By bus: from Kyoto station take bus no. 5 for 35 minutes to
Nanzenji Eikandodo Bus Stop. From there it’s a 7 minute walk to Nanzen-ji. 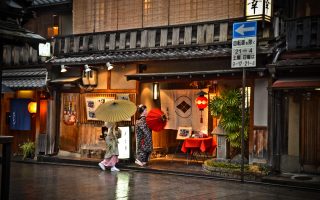