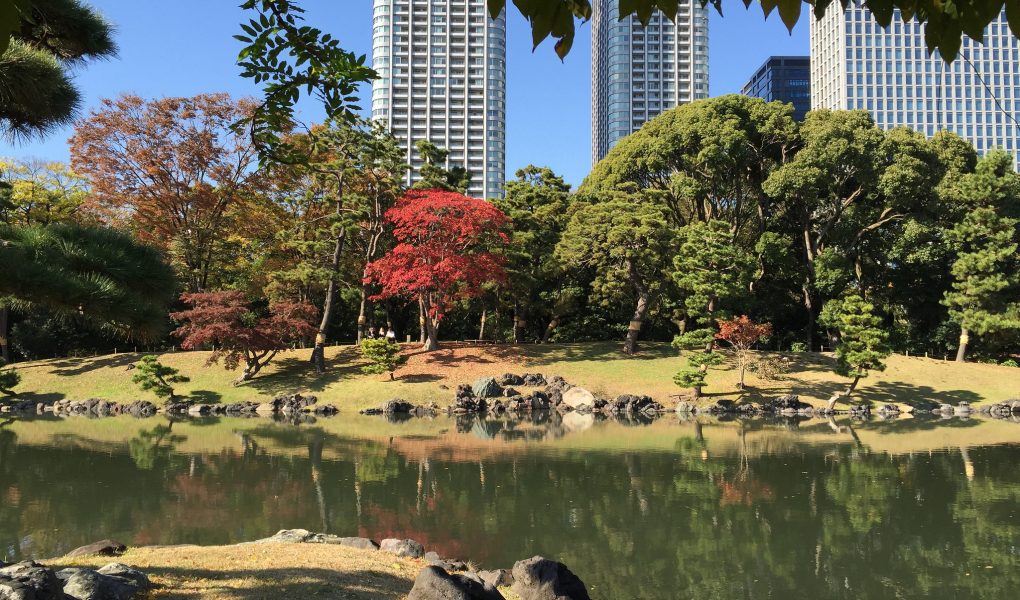 Hamarikyu Gardens (Hama-rikyū) is a tranquil park in central Tokyo. The park is located near the old Tsujiki fish market and right next to the river. Hamarikyu Gardens feels quite special – pretty much anywhere in the park, you see the modern “forest” of high rise buildings surrounding the area.

Hamarikyu is probably my personal favorite park in Tokyo. The park lies on a historic site, surrounded by a moat making it feel like a small island. When you stand in the park you can see the sky scrapers around you in all directions, and really feel how the city of Tokyo has grown around the garden.

Hamarikyu Gardens has flowers for pretty much every season; In the spring pink plum flowers and a field of yellow colza (canola).  In late spring and early summer Peonies and Cosmos, and in the fall the famous Japanese fall leaves can be experienced here. It really makes it an ideal place to visit pretty much all year around.

The park has several tidal ponds, meaning that the water is drawn from the bay and moving with the tides. On an island the larger of the ponds is placed a traditional tea house where visitors can enjoy a traditional Japanese matcha tea with Japanese sweets.

The history of what is known as Hamarikyu Gardens today starts in 1654. Back then, shogun Ietsuna’s brother, named Tsunashige, reclaimed the land and built a villa there for his family. The grounds were then known as “Kofu Hama-Yashiki” – Kofu Beach Pavilion. Tsunashige was the ruler of Kofu, a city south-west of Tokyo, hence the name. The garden feature two duck hunting pools and was also used for falconry.

Tsunashiges son Ienobu became the 6th shogun under the Tokugawa rule, and the grounds now belonged to the Tokugawa clan. The name of the park was changed to “Hama-Goden” meaning “Beach Palace”. In the following years the changing shoguns made each their contributions to the appearance of the park. Today, the park supposedly looks more or less like it did when the shogunate reached the 11th shogun, Ienari in 1787.

After the Meiji Restoration (1868-1912) the park belonged to the imperial family, and became a detached palace for them. In this connection the name of the grounds changed again, this time to “Hama-rikyū Onshi Teien” – Hama Detached Palace.

Hamarikyu gardens was damaged in a huge earthquake in 1923, and was later destroyed during world war 2, like many other sites in Japan. The imperial family donated the site to the city of Tokyo in 1945, and in 1946 it opened as a public park.

Near the entrance of the park stands a 300 year old pine tree. The tree is really impressive in the area it covers, and its branches must be kept up with sticks. The 300-year pine tree is said to be planted to celebrate the 6th Tokugawa shogun, Ienobu. Miraculously the tree survived world war 2, when other parts of the park was heavily damaged.

A beautiful tea house is located in Hamarikyu gardens. This is probably one of the most beautiful places in Tokyo to try out a Japanese tea ceremony. OK, it isn’t a traditional tea ceremony in that it is unsupervised, but you do get instructions on how to drink the tea, eat the sweet treat and be thankful. The prices are really reasonable. A matcha green tea with traditional sweet treat costs around ¥500-700. If you are around, you should definitely try this out. It’s  a really great experience.

Every year in October the Tokyo Grand Tea Ceremony is held in the park. The tea ceremony is a great opportunity to try out a real Japanese tea ceremony. It is also a good occasion to observe the many beautiful Kimonos of the Japanese attendants. There are also tea ceremonies offered in English for beginners during this celebration.

You might also be interested in these articles about Tokyo: Tokyo Tower, Senso-ji Temple, Hachiko Statue, Robot Restaurant or these posts about other parks and gardens in Japan.

Also check out my posts about visiting Japan on a budget, Japan Rail Pass and the best travel guides for Japan and Tokyo.

By train: the nearest stations are Shiodome Station and Tsukijishijo Station. Take the Odeo Line to Tsukijishijo Station or Yurikamone Line or Odeo Line to Shiodome Station. From both stations it’s a short 5 minute walk to Hamarikyu Gardens.
If you travel with a Japan Rail Pass you can get off at Shimbashi Station which is a 10 minute walk from the park. The Yamanote, Tokaido, Yokosuka, Keihntohoku and Joban Lines all stop at Shimbashi (all covered by JR pass). The Asakusa and Ginza Lines also stop at Shimbashi.

By boat: the Tokyo Mizube Cruising Line (water bus) has a landing point inside Hamarikyu Gardens. The Asakusa-Odaiba Line makes stops here, but only a few times a day, so check the schedule if you are interested. 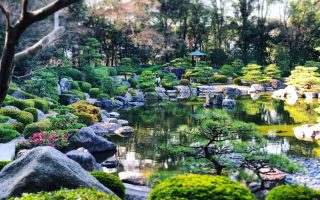 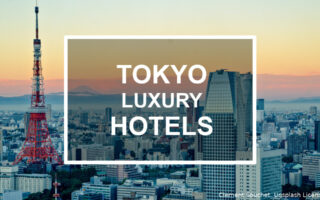 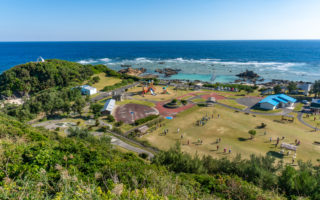